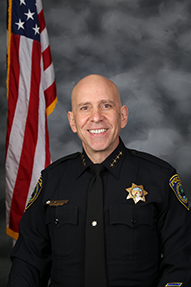 Assistant General Manager (AGM) of Public Safety Anthony Ciaburro joined the East Bay Regional Park District Police Department in 2015 after a distinguished career with the San Jose Police Department. AGM Ciaburro oversees Police, Fire, and Lifeguard Services. He is the Park District’s Chief of Police. He has established a unified vision for not only protecting the District’s lands but emphasizing stewardship as well.

Chief Ciaburro is committed to public service and defending the constitutional rights of all people. He believes all law enforcement personnel share the burden of a troubled history and are responsible for enacting a most promising future. The police and those whom they are sworn to protect can only reach this goal via joint determination.

Chief Ciaburro continues the philosophy of “Good to Great” as the AGM. Along with his command and professional staff, improvements have been made in all areas with the goal of ever-increasing professionalism and improved performance. He and his team have added select technological enhancements and increased employee recognition, staying vigilant to recognize any possible improvements for the Division and District's betterment. They have combined these overall innovations with a recruiting strategy that emphasizes the distinction and privilege of working for the Park District.

In his capacity as AGM of Public Safety, Chief (AGM) Ciaburro extended his drive for continuous improvement for Fire Department and Lifeguard Services. He has placed great value on supporting the leadership of the Fire Department to ensure strong professional growth and mission fulfillment. Through a series of personnel changes, the Fire Department is experiencing an extraordinary period of operational resiliency, continuing to meet and overcome the many significant challenges of present-day fuels management and firefighting.

Chief Ciaburro, the Fire Chief, and the Lifeguard Services Manager have continued to support the high-performing Lifeguard Services Division. Chief Ciaburro has increased permanent staffing over multiple budget cycles to ensure robust leadership levels and operational efficiencies. He emphasizes a well-balanced workforce that can expertly perform the required tasks while espousing and actualizing true public service.

Chief Ciaburro has bachelor’s and master’s degrees in criminal justice from San Jose State University. He also has a minor in Spanish and speaks it fluently. He is a graduate of the 2011 FBI National Academy (NA 245). 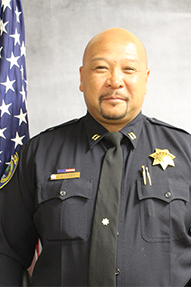 Captain Elzey earned a Bachelor of Science degree in Criminal Justice Management from Union Institute and University and is a graduate of San Mateo County’s Inner Perspective and Public Sector Leadership programs, the Los Angeles Sheriff’s Department’s Sherman Block Leadership Institute, and the Los Angeles Police Department’s West Point Leadership program. During his time at the Sheriff’s office, he has held positions of Commander of two correctional facilities, Commander of the Criminal Investigations Bureau, SWAT Captain, and Commander of the Professional Standards Bureau.

Captain Elzey is heavily involved with the local youth community. He currently volunteers his time as the President and Head Coach of the Bayside Broncos Youth Football organization, a non-profit dedicated to teaching the fundamentals of football to our youth, while focusing on the importance of academics. 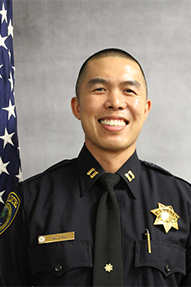 He is a graduate of the Police Executive Research Forum (PERF), the Senior Management Institute for Police Executives (SMIP), and the FBI Law Enforcement Executive Development Association (FBI-LEEDA). Captain Lau is currently a sitting board member for the Asian Advisory Committee on Crime, the Asian Youth Services Committee Mentor, and a member of OPD’s Race and Equity Team.

Captain Lau attended San Jose State University where he graduated with a Bachelor of Science in Justice Studies with a minor in Sociology. He was the former Oakland Asian Police Officers’ Association President, former Vice President of the National Criminal Justice Honor Society, and a member of the National Asian Peace Officers’ Association (NAPOA) where he focused on community engagement, employee development, and mentoring.

Captain Lau is fluent in Cantonese, and a proud husband and father to two. They enjoy hiking and exploring the great East Bay Regional Parks. 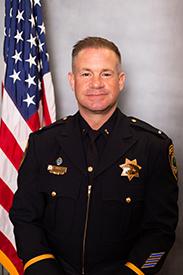 Lieutenant David Phulps began his law enforcement career with the East Bay Regional Park District Police Department in 1999. Promoted to Lieutenant in 2017, he now serves as the Support Services lieutenant, where he oversees the Recruitment and Training, Budget, Fleet Maintenance, building, and other projects.  He is also the Information Services Liaison.

During his tenure with the Department, he’s been a Crime Scene Investigator, Field Training Officer, member of the Alameda County Sexual Assault Felony Enforcement Task Force, SWAT Team Leader, Detective, and Patrol Sergeant, and he has supervised the Professional Standards Unit.

He is a husband and father to two boys. 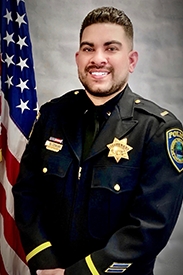 Lieutenant Giorgio Chevez began his law enforcement career with the East Bay Regional Park District Police Department in 2008. Promoted to the rank of Lieutenant in 2021, he oversees half of the Patrol Operations Division, the Special Enforcement Unit, and the Air Support Unit.

Lieutenant Giorgio graduated from San Francisco State University, with a bachelor’s degree in Criminal Justice. He is also a graduate of the 142nd Alameda County Sheriff’s Office Police Academy.

He served in many roles throughout his career, including the Police Association President, Field Training Officer, Investigator for a Regional Narcotics Task Force, Sergeant in the Operations Division, and Investigations Unit Sergeant.

Lieutenant Chevez resides in Contra Costa County with his family. 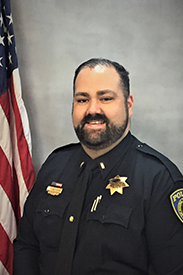 Lieutenant Terrence Joseph Cotcher began his law enforcement career with the East Bay Regional Park District Police Department in 2006 as a police recruit. In July of 2018, he was promoted to Lieutenant and is currently assigned to the Operations Division.  He oversees half of the Patrol Operations Division, the Investigations Unit, and the EBMUD/JPA (Joint Powers Agreement).

Lieutenant Cotcher graduated from the University of California, Davis, with a bachelor’s degree in History and a minor in Political Science. He then became a public school teacher.

In 2007 he became a Police officer, working in patrol and the Special Enforcement Unit and later utilizing his teaching skills as a firearms instructor. In 2015, he was promoted to Sergeant and worked in the Personnel & Training Unit in charge of all department training and hiring of employees.

Lieutenant Cotcher resides in Brentwood with his family and is an avid user of the Park District.

Communications, Records, and Property Manager Patty Gershaneck began her career with the East Bay Regional Park District as a Public Safety Communications Dispatcher in 2003. Patty was promoted to her current position where she manages the Communications Center, Records, and Property/Evidence Units. She also works with Park Operations maintaining the District’s radio and cell phone infrastructure and security systems.  She is the Special District Representative for the Technical Advisory Committee of the East Bay Regional Communications System Authority (EBRCSA).