About the General Manager 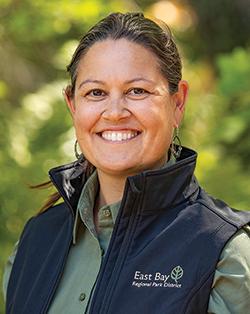 Ms. Landreth has deep roots in the East Bay as a 5th generation native who has held the top executive leadership positions managing the cities of Oakland and Emeryville. She received a Master of Public Policy from University of California, Berkeley and a Bachelor of Science from the Massachusetts Institute of Technology.

“I am honored to be appointed by the Board as the District’s next General Manager. I look forward to continuing to build upon the great work the District does to improve the quality of life for our East Bay community, while adhering to its social and environmental responsibilities.”

Most recently, Ms. Landreth served as City Administrator in Oakland from 2015- 2020, where she is credited with strong fiscal management and developing a capital improvement program that included community equity goals and has become a model program for local governments around the country. She also worked for Oakland as Deputy City Administrator, Budget Director, and Legislative Analyst to the City’s Finance Committee.

Previously, Ms. Landreth served as City Manager of Emeryville and as staff in the California State Assembly advancing state and local legislative initiatives.

» Messages from the General Manager

Public Feedback - We want to hear from you!

For all other inquiries, please send a message using the link below.