Our Parks in a Changing Climate: Climate Smart Initiative

The Park District acknowledges and is preparing for the future of our parks in a changing climate.

Climate-related hazards are situations resulting from a changing climate that can be harmful to people, structures, or the environment. While there are many potential hazards, the Park District has identified wildfire, extreme heat, sea level rise, flooding, drought, and increased pest and disease, as the primary hazards that could affect our parklands. Additional information on what the Park District is doing to address these hazards can be found on our Climate Actions in Our Parks web page.

Wildfire
With rising temperatures and drought, wildfire risk increases. While fire is a natural process and vital for some habitats, uncontrolled or intense wildfire poses a risk to our parklands and neighboring communities.  The Park District is proactively mitigating wildfire risk through a robust fuels management program and education campaign.

Sea Level Rise
The Park District has over 55 miles of bay shoreline, some of which is threatened by sea level rise. The Park District is designing shoreline and tidal wetland restoration projects considering future sea levels. These projects help protect nearby parklands and communities from flooding while providing habitat benefits that adapt to the changing conditions. The Park District is also conducting a study to better understand vulnerabilities along the Bay Trail (SF Bay Trail Risk Assessment and Adaptation Prioritization Plan) and working to develop the Hayward Shoreline Adaptation Master Plan to identify multi-benefit strategies to address sea level rise. Explore our storybook on the East Bay Regional Parks and Sea Level Rise.

Flooding
An increase in extreme weather events may result in flooding that affects infrastructure, habitat, and park users. Combined with drought, the hardened ground may be less able to absorb rainwater leading to increased erosion or mudslides. The Park District considers flooding potential in new designs and construction and is modifying trails and drainages to reduce potential damage from erosion. In 2018, voters approved Measure FF, which supports numerous erosion control projects that will help parks prepare for future funding.

Drought
Increased temperatures and changes in rainfall patterns may lead to prolonged periods of drought. Wildlife and plant species are threatened by decreased water sources and the risk of wildfire is increased. The Park District is installing rain catchment systems and repairing ponds to hold water for longer periods of time. These supplemental water sources during periods of drought.

Pests & Disease
Drought and other extreme weather events weaken species and increase the vulnerability of ecosystems to pests and disease. Pests that affect our parks include invasive plants and animals, insects, soil pathogens, blue-green algae, and disease. The Park District’s Integrated Pest Management Program focuses on prevention through reducing the potential for introduction and spread of pests and pathogens.

When necessary, the Park District utilizes the most current science and best management practices to treat disease and control pests. Learn more about our treatment of Blue-green algae in this video:

Visit our Climate Smart Initiative and Policy web page for more information on our district’s policies, practices, and guidelines.

Ecosystem Services Provided By Our Parklands

Over 90 percent of District lands are protected natural landscapes consisting of estuarine, wetland, woodland, forest, riparian, scrubland, and grassland habitats. This dynamic ecosystem supports more than 500 different vertebrate species and about 1550 plant species. The District is responsible for the protection, conservation, and recovery of 15 endangered species (including 6 plants), 17 threatened species (including 1 plant), and 27 fully protected or species of special concern.

The Park District’s 55 miles of shoreline along the San Francisco Bay and Delta help to protect infrastructure, land, and people from sea level rise. The shoreline properties are diverse, ranging from expansive tidal wetlands, to sandy beaches, to narrow bands of riprap. The shoreline provide habitat for many threatened and endangered species and unique opportunities to recreate with bay-front views. Explore more about sea level rise and costal resilience: Adapting to Rising Tides

In order to grow, plants take carbon out of the atmosphere and transfer it into the plant material and soil, a process referred to as carbon sequestration. A 2016 study reported that Park District’s lands store nearly 300,000 tons of carbon dioxide equivalents, which is comparable to the amount of carbon released by 59,300 vehicles during a year. Our restoration projects, which lead to new and enhanced wetland, grassland, scrubland, and forest habitats increase our potential for capturing and storing carbon.

Parks are cooler than the surrounding urban environment due to the phenomenon called the Park Cool Island Effect (PCI). On average, it is 1-2°C cooler in parks.

Parklands and open spaces remove carbon and pollution from the air we breathe.

In 2014 the Park District prepared a Strategic Energy Plan. Since then, the Park District has completed about 500 energy efficiency projects, mostly lighting replacements, which reduce our overall energy consumption. 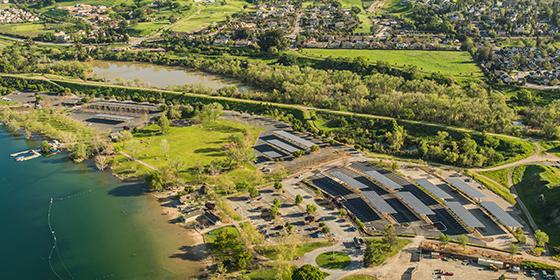 Parkland Updates in a Changing Climate 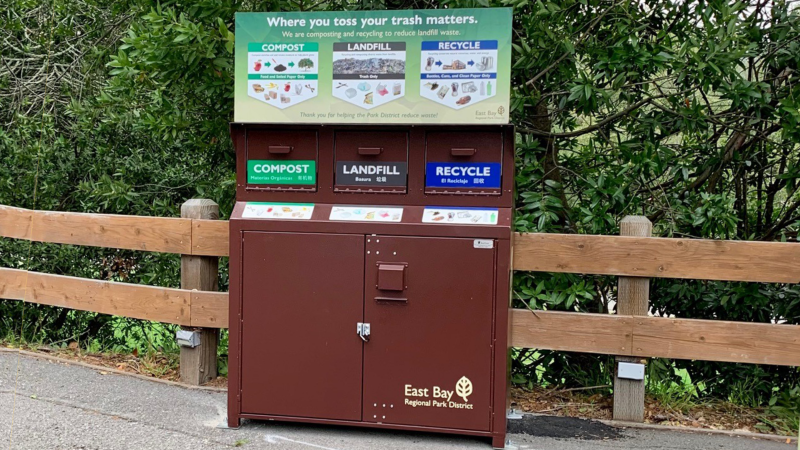 Throughout the parks, the District is installing three-stream sorting stations for compost, recycling and trash. These stations were designed to provide clean and efficient collection for our visitors while protecting wildlife from contact with debris. Custom signage was created to describe which material goes where and the benefits of waste diversion.

The District provides multiple trails and route which connect residential neighborhoods to workplaces for users if they chose to commute to work by walking, skating, or biking. Providing these trails reduces the carbon footprint of persons who now have access and connections to their workplaces via park trails. Interested in using our trails for your commute? Check out our Interpark Regional Trails page. For more information on biking in the parks visit our Biking page and our Paved Trails page.