The East Bay has a long history of wildland fires and over time the East Bay has become increasingly more prone to fires. Hillsides formerly covered by grassland have become covered by many non-native exotic annual grasses and by densely growing non-native pine, cypress and eucalyptus trees.  This increase in vegetation has also meant an increase in fuel.  Additionally, as the population of the East Bay expanded, urban development moved into the wildland spaces, or spaces that were predominately grass with scattered trees and shrubs.  Landscaped houses nestled in among maturing trees, brush and other vegetation have become fuels themselves.

The climate of the “East Bay Hills” is classed as Mediterranean with cool, winter rainfall and warm, dry summers.  The East Bay’s worst fire weather is created by the seasonal Diablo Winds.  These strong, hot, and dry winds coming from the East increase the likelihood of a fire by drying out the local vegetation.   They also lead to unpredictable fire behavior and make it harder to suppress fire once it has been ignited.

Of all the fires in the East Bay, the 1991 Oakland-Berkeley Hills Tunnel Fire has been the most devastating and still ranks as one of the most disastrous fires in American history.  This 1600 acre fire claimed 25 lives, 2900 homes and caused damages in excess of one billion dollars.  Go to  The Oakland Hills Firestorm page for  the complete story.

Within a 2-mile radius of the Caldecotl Tunnel, 15 major fires have burned since the first fire documented in 1923.  During the 75 year period between 1923 and 1998, eleven Diablo wind fires alone burned 9,840 acres, destroyed 3,542 homes, and took 26 lives, with over 2 billion dollars in financial losses.  When mapped it becomes apparent that the fires often reoccur in the same general areas and show similar environmental conditions.

It is important to know the fire history because it gives East Bay area residents a better sense of what to expect in the future. And as you can see on the map, large fires historically have occurred between every 10-20 years.  As weather conditions become hotter due to climate change, we must be even more proactive about managing fuels and protecting ourselves against the dangers of a wildfire. 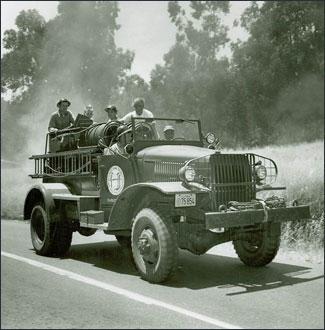 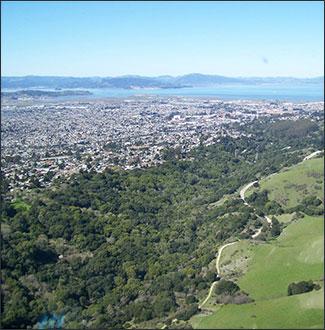