Until further notice, the walk-in entrance to the Alameda Creek Paved trail from the downstream (southwestern) sidewalk at Alvarado Blvd (Fremont Blvd) will be temporarily CLOSED due to safety concerns. We apologize for any inconvenience.

The Alameda Creek Regional Trail follows the banks of Alameda Creek in southern Alameda County from the mouth of Niles Canyon (in the Niles District of Fremont) westward to San Francisco Bay - a distance of about 12 miles.

The trail is accessible from several thoroughfares in Fremont, Union City, and Newark. MOTOR VEHICLES ARE NOT ALLOWED ON THE TRAIL. Note: Class 1 and Class 2 e-bikes are currently allowed on paved sections.

To Reach the Trail

The south-side trail is recommended for bicyclers, hikers, joggers, and runners. The north-side trail is designed for horseback riding. Note that there is no direct access to Coyote Hills Regional Park from the trail on the north side of the creek. Bicyclists must wear a helmet and must ring a bell or call out to warn other trail users as you approach from behind.

Alameda Creek is Alameda County's largest and is home to a host of birds and other wildlife. Long ago its rushing waters provided a valuable resource for the Ohlone Indians who first settled in camps and villages along its banks. For information about Ohlone shellmound tours and Native American studies at Coyote Hills Regional Park, phone the Visitor Center at (510) 544-3220.

The area was visited and explored by members of five Spanish expeditions led by Ortega, Fages, de Anza, and Amador between 1769 and 1795. Mission San Jose de Guadalupe, located near the intersection of Washington and Mission boulevards, was dedicated in 1797. The 30,000-acre mission thrived for 49 years until the Secularization Order liquidated mission lands in 1834.

After secularization, the mission acreage fell into private ownership. Corruption grew, and in 1846 the lands of Mission San Jose were sold by the governor for $12,000 to Juan Alvarado. This sale was declared fraudulent in 1858 in United States courts and the lands became part of public domain.

Alameda Creek was the boundary of the mission lands and the 17,000-acre Rancho Arroyo de la Alameda was granted to Jose de Jesus Vallejo. Construction of a flour mill near the mouth of Niles Canyon by Vallejo, plus the importance of the canyon as a passage through the hills, led to the growth of a small town (today known as Niles) in the 1850s.

A favorable climate, excellent soils, and a fast-growing population helped agriculture to boom. Early roads led to landings where small ships would load grain and other foodstuffs for transport to market. Completion of the transcontinental Central Pacific railroad through Niles Canyon in 1869, and the Western Pacific in 1906, improved the situation for shipment of goods -- a service that is still beneficial to the area.

Movie making came to the Niles district for a short stay during World War I, when the Essanay movie production company moved in. Charlie Chaplin, Ben Turpin, Gloria Swanson, and others got their start in movies in Niles before the industry settled in Hollywood.

Quarrying for gravel was an early industry in this area and continues today.

The Alameda Creek Trail opened in January 1973. The project was funded by the U.S. Army Corps of Engineers, the Alameda County Flood Control and Water Conservation District, and the East Bay Regional Park District. 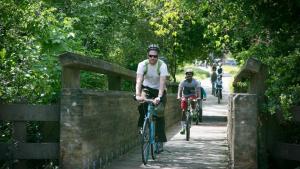 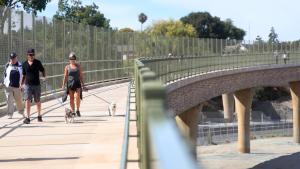 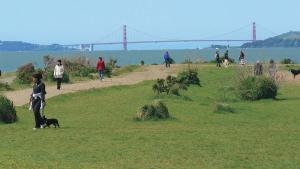 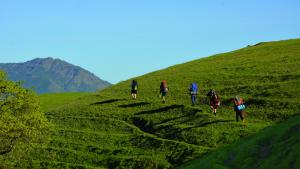 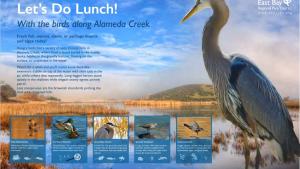 View a gallery of the Interpretive Panels located at various locations along the Alameda Creek Regional Trail.