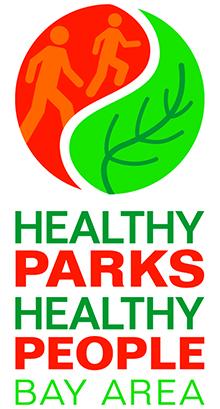 Healthy Parks Healthy People Bay Area (HPHP Bay Area) was conceived in 2012 by the Institute at the Golden Gate in partnership with the East Bay Regional Park District (EBRPD) and Golden Gate National Recreation Area (GGNRA) to mobilize local organizations in the parks and medical communities to join the movement to connect parks and health.

The goal of this collective impact collaborative is to coordinate programmatic efforts and raise awareness through public education about the symbiotic value of health and parks.  Additionally, as the San Francisco Bay is widely seen as the incubator for innovation and trends, park and healthcare providers hope that this regional initiative can be a catalyst for broad policy change that advances the adoption of measureable recreational models to support the delivery of healthcare to reduce obesity and chronic disease particularly in children.

Not long after the National Park Service generated its Strategic Action Plan for Healthy Parks Healthy People U.S., staff from the Institute at Golden Gate met with executives from EBRPD and GGNRA to establish a core HPHP Bay Area founding team.   These three entities agreed to share the responsibility for initial development of the coalition concept.  To support the initiative, the Institute recruited an MBA candidate from the University of Michigan to research other successful efforts from around the country. This research yielded guiding principle models for a successful coalition, some proven strategies for collective decision-making and implementation, and several possible governing structures.
From the beginning, the founding HPHP Bay Area partners agreed that the effort would require equal participation from parks, health, and community leaders in order to achieve the maximum amount of success.  They also believed that leveraging the efforts of a Bay Area-wide coalition, rather than acting alone, would both widen the reach and deepen the programs’ impacts on the health and wellbeing of the Bay region.

A group of 11 leaders continued to meet monthly from July 2012 to clarify the vision and coalesce around common goals. In a continued effort to represent and reflect the Bay Area communities served by the coalition agencies, the leadership group has grown to represent 29 organizations representing nine Bay Area counties. These contributing partners have set short-term and long-term benchmarks for the coalition through a collaborative process. From existing resources alone, the partners have pulled together a strong suite of programs that have the potential to reach 7.1 million residents and improve throughout the San Francisco Bay region.

A Memorandum of Understanding was crafted in 2013 to establish a general framework for the cooperative relationship of HPHP Bay Area lead organizations representing parks and open space, healthcare and public health and educational institutions.  The 29 cooperating agencies involved are as follows:

Point Bonita YMCA, a branch of the YMCA of San Francisco

Programming throughout the Bay Area - 2016

All HPHP Bay Area park agencies have agreed to host programs and monthly activities on the first Saturdays each month to provide safe, low-impact physical activity dedicated to improving the health and well-being of all Bay Area residents.