This 1,249-acre regional park provides tremendous views from its setting in the Fremont Hills. The plateau rises quickly and steeply from the bay plain to an elevation 1,000 feet above the streets below, overlooking Niles Canyon, Fremont, Union City, Newark and the San Francisco Bay beyond. Atop the plateau a pastoral landscape predominates, and golden eagles, hawks, deer, bobcats, frogs, snakes and a variety of other animals make their home in the open grasslands, ponds and steep wooded canyons. These characteristics, with the Bay Area Ridge Trail along the ridgetop, make the park a great place for outdoor recreation and nature appreciation on the urban/wildland threshold.

From I-680 in Fremont, exit at Vargas Road and go north. Drive about 1.6 miles to Morrison Canyon Road and turn right. The staging area is ahead on the left about 0.4 miles. Car-pooling is strongly recommended as staging area parking is limited. There is no street parking in the area. 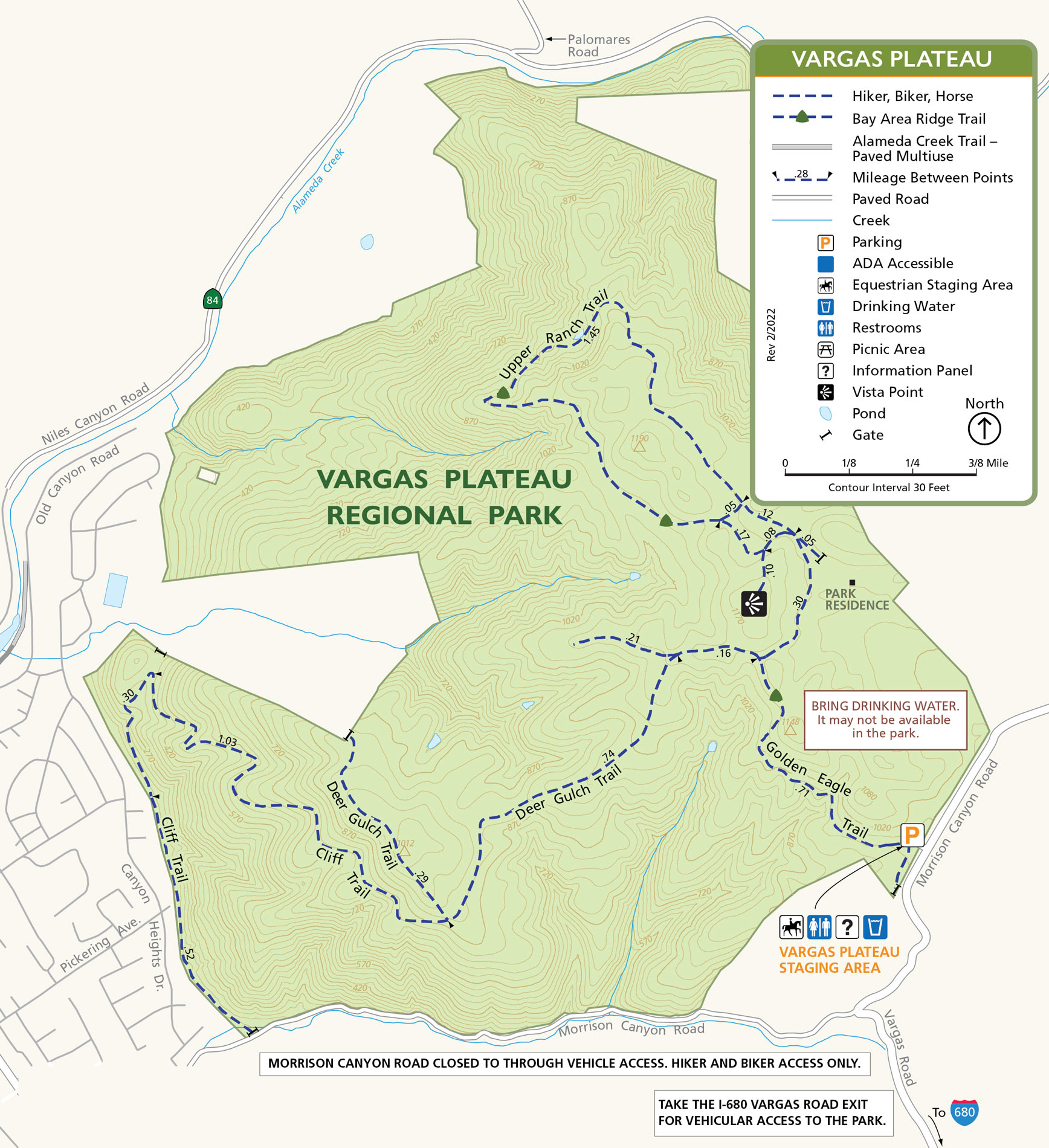 Due to steep grade, the trails are generally not suitable for wheelchair users.

The parkland provides an important ridgetop link between ridgeline parks to the north and south (Garin, Pleasanton Ridge, Mission Peak, Sunol). This makes it an important corridor connecting habitats for threatened species, allowing genetic mixing between populations and encouraging their recovery. The ponds in Vargas Plateau provide habitat for several special-status species, including the threatened California red-legged frog and the Alameda whipsnake, and for the federally threatened California tiger salamander.

Ground squirrels are easily found in the highest elevations of the plateau. Their burrow chambers may be inhabited by the California tiger salamander and the California red-legged frog, and by reptiles such as the Pacific gopher snake and the Northern Pacific rattlesnake. Many insects also utilize the burrows, including crickets, ants and beetles, which serve as food for non-breeding tiger salamanders. The ground squirrels, along with the California meadow vole, attract a wide array of predators such as the white-tailed kite and Northern harrier.

Wetland habitats within Vargas Plateau include several ponds and seasonal wetlands. Upland, tributary drainages serve as the headwaters of various streams, all of which drain into Alameda Creek. The dense stands of coast live oak and interspersed California bay located in the drainages and on the plateau’s steep slopes support a wide array of species, including the gray fox, black-tailed deer, dusky-footed woodrat, red-tailed hawks, Cooper’s hawks, the great-horned owl and tiny pygmy owl, and wild turkeys.

The park’s steep topography has contributed to the plateau remaining somewhat isolated from major human encroachment, save for mostly agricultural uses such as ranching and dryland farming. This in turn has preserved the plateau’s integrity as a favored foraging area for golden eagles and other raptors, and for far-ranging mammals such as coyotes, bobcats and mountain lions.

There are more than six miles of hiking, biking and equestrian trails. This is a prime location for birdwatching, especially raptor viewing, and the ridgetops offer panoramic views westward towards San Francisco Bay. Facilities include only a trailhead with a wayside panel and a restroom. Bring sufficient water for you and your animals, as drinking water is not available.

The Park District’s Phase Two plans for Vargas Plateau Regional Park include group and trekking camps, which are dependent on the construction of an upper staging area. More significant road improvements will likely be needed prior to opening these areas to the public. This phase could take years to implement.

This parkland appears to be located within the homeland of the Tuibun, an Ohlone-speaking tribe with villages in the Fremont Plains, or the Causen, an Ohlone-speaking tribe or village in the Sunol Valley. The Tuibun and Causen lived with the land rather than on it, managing it with specialized horticultural techniques that increased the numbers and health of the innumerable plants and animals on which they relied. The 1772 and 1776 arrivals nearby of Spanish expeditions foreshadowed a time of severe dislocation and suffering for the Tuibun and Causen under the Spanish, Mexican, and early American governments. Despite the changes of history, today’s Ohlones continue to maintain cultural communities and traditions.

In 1797 the Tuibun and Causen began living and laboring at Mission San Jose. Following secularization of the mission, they became serf-like laborers on Mexican land grants, undoubtedly including the “Rancho Ex-Mission San Jose” given to Juan Bautista Alvarado and Andres Pico in 1846, of which Vargas Plateau was part.

With California statehood in 1850, many grants were reviewed by American courts. The courts invalidated Alvarado’s and Pico’s grant. By 1878, the land was being used as a horse-breeding ranch, and by the turn of the century it was subdivided. In 1909, Antonio Francisco Vargas took possession of 444 acres of the “lower ranch,” and three years later, his brother Manuel and nephew Edward Vargas purchased 550 acres of the “upper ranch.” The Vargas’ used the land for sheep and cattle ranching and dryland farming. Antonio’s family raised cattle on the lower ranch property until its sale to the District, and continue ranching on their homestead nearby. The Tavares family inherited the upper ranch property when Edward Vargas passed away in 1978 and continued ranching and farming.

In 1993 the Park District acquired the Vargas family land, and in 1996 acquired the Tavares family land. Mrs. Abel (Pearl) Vargas donated over $1 million of the appraised value of the Vargas property to the Park District, by selling the property to the District at a below-market rate of $1.9 million. The Tavares property was acquired for $4.7 million with a portion of the acquisition costs supplied by a Caltrans ISTEA grant. Since that time, the District acquired additional Rose and Comcast properties in 2010, bringing the acreage to 1,249.02 acres.