From I-580 in Livermore, exit onto N. Livermore Ave. and turn north. Shortly after N. Livermore curves left (west), turn right onto Morgan Territory Road and follow it for about 5.5 miles to the staging area. From Walnut Creek/Concord, take Clayton Road to Marsh Creek Road, then turn right onto Morgan Territory Road. The staging area is 9.4 miles from Marsh Creek Road. 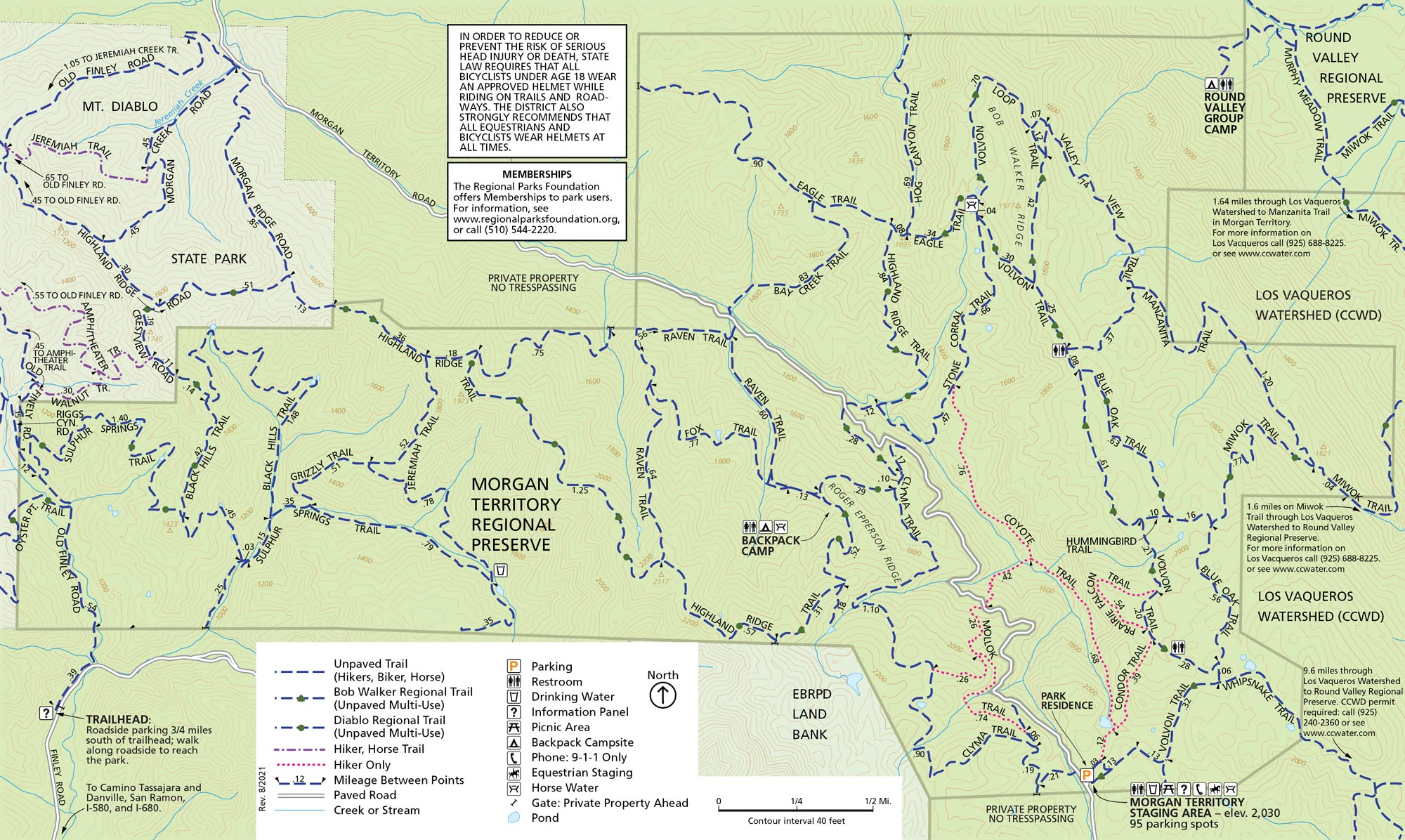 The backpack camp is not wheelchair accessible.

Sandstone hills within the park's 5,321 acres are adorned in spring with more than 90 species of wildflowers, including the Diablo sunflower (Helianthella castanea), which grows only in the foothills of Mount Diablo. Deer, coyote and even the elusive mountain lion may be seen here, and a variety of raptors frequently soar overhead.

Expansive ridgetop views reveal Mount Diablo to the west, Mount St. Helena to the north and the snow-covered Sierra to the east. Lowland valleys cradle the headwaters of Marsh Creek.

Park activities include hiking, horseback riding, picnicking and camping. There is a backpack campsite in the Regional Preserve. Reservation is required to use the campsite. To make a reservation, call 1-888-EBPARKS or 1-888-327-2757, press option 2.

According to Native American folklore, at the dawn of time, Tuyshtak (today's Mount Diablo) was the sacred birthplace of the world. Supernatural beings, the First People, lived here. The First People are often designated with the names of the animals whose attributes are reflected in their personalities-animals such as Condor (Mollock), Prairie Falcon, Eagle and Coyote. These personages created Native Americans, and provided them with a bountiful, beautiful world. Most of the park's trails are named to commemorate these First People (Coyote, Fox and Eagle trails), while other names refer to natural features (Valley View, Blue Oak and Highland Ridge trails). Hog Canyon and Jeremiah trails harken back to the park's ranching past.

Morgan Territory is located within the traditional homeland of the Volvon, one of five Native American nations in the Diablo area who spoke dialects of the Bay Miwuk language. Their way of life was characterized by a rich heritage of social, political, economic and religious tradition--tradition built upon thousands of years of living with the land, during which new ideas, technologies and Indian groups came into the area.

Their world changed dramatically after 1772, when the Spanish began to explore the East Bay. Diseases killed large numbers of people at the crowded, unsanitary missions, while Spanish military expeditions killed others. The Volvon were among the Native American groups who resisted Spanish missionization, but by 1806 the resistance had faded. The change from the old way of life was completed during the early years of American settlement, although many California Native Americans continue to practice the traditions of their ancestors while living within the framework of modern life.

Morgan Territory is named for Jeremiah Morgan, who was born in 1818 on the banks of the Tennessee River in Alabama. Morgan and six companions crossed the plains to California by ox-drawn wagon in 1849. After a brief stint as a gold miner, Morgan left California for Iowa, only to return with his family in 1853. In 1857 he started a ranch in the area that we know as Morgan Territory after having seen the land while on a hunting expedition.