Pleasanton Ridge Regional Park is CLOSED due to fire. DO NOT ENTER PARK.

McLaughlin Eastshore State Park is one of the most outstanding achievements in the history of open space protection. It is the result of decades of citizen efforts to protect San Francisco Bay as a public open space resource. Over 4,000 major stakeholders and interested parties reached a substantial consensus on the future uses and improvements for the park. The newly designated State seashore is a recreational facility harmonious with its natural setting. It is located in the midst of one of the most highly urbanized areas of California.

The park extends 8.5 miles along the East Bay shoreline from the Bay Bridge to Richmond. It includes 1,833 acres of uplands and tidelands along the waterfronts of Oakland, Emeryville, Berkeley, Albany, and Richmond.  The park parallels the most heavily traveled corridor in the East Bay, making it a highly visible, highly accessible area of parkland.

The East Bay Regional Park District, acting as agent for the State, used funds from the Park District's 1988 Measure AA and state park bonds to acquire the property and clean up contaminated areas at a cost of more than $33 million. The McLaughlin Eastshore State Park General Plan identifies the future preservation, conservation, and recreation uses and improvements for the park.

The East Bay Regional Park District is enhancing and restoring a number of ecosystems and habitat types throughout the park. The Berkeley Meadow Habitat Restoration is one such project that improved public access and ecological habitats in the Berkeley Meadow.

The 72-acre Berkeley Meadow was operated by the City of Berkeley until the 1960s. Hazardous materials were removed in 1998. Habitats in the Meadow consisted of non-native weeds, small patches of native vegetation, and several seasonal wetlands that had developed atop the subsiding landfill. A three-phase restoration plan was completed in 2011.

The 72-acre meadow, a former landfill site, was restored in three phases over five years at a cost of $6,000,000. The finished meadow has seasonal wetlands, coastal prairie, and coastal scrub areas, creating a diverse and thriving habitat for plants and animals in an urban area. Walking paths and interpretive signs welcome the public.

The first portion of the park to be opened to the public by the East Bay Regional Park District was the multi-use trail connecting Pt. Isabel Regional Shoreline to the Richmond Marina. Additions to the San Francisco Bay Trail will likely be the next park facilities to come online as environmental remediation projects are completed. Portions of this section of the Bay Trail are now being designed.

From NORTHBOUND I-80 (the Eastshore Freeway) or from SOUTHBOUND I-580 in Albany, take Buchanan Street westbound (towards the Bay). A limited amount of PARKING is available at the western end of Buchanan Street.

From I-80 (the Eastshore Freeway)/I-580 in Berkeley, take westbound Gilman Street (towards the Bay). At the western end of Gilman Street, PARKING is available in the parking lot on the south side of the street.

From SOUTHBOUND I-80 (the Eastshore Freeway)/I-580, take westbound Ashby Avenue (towards the Bay). Turn LEFT onto Frontage Road. A very limited amount of PARKING is available at Point Emery. 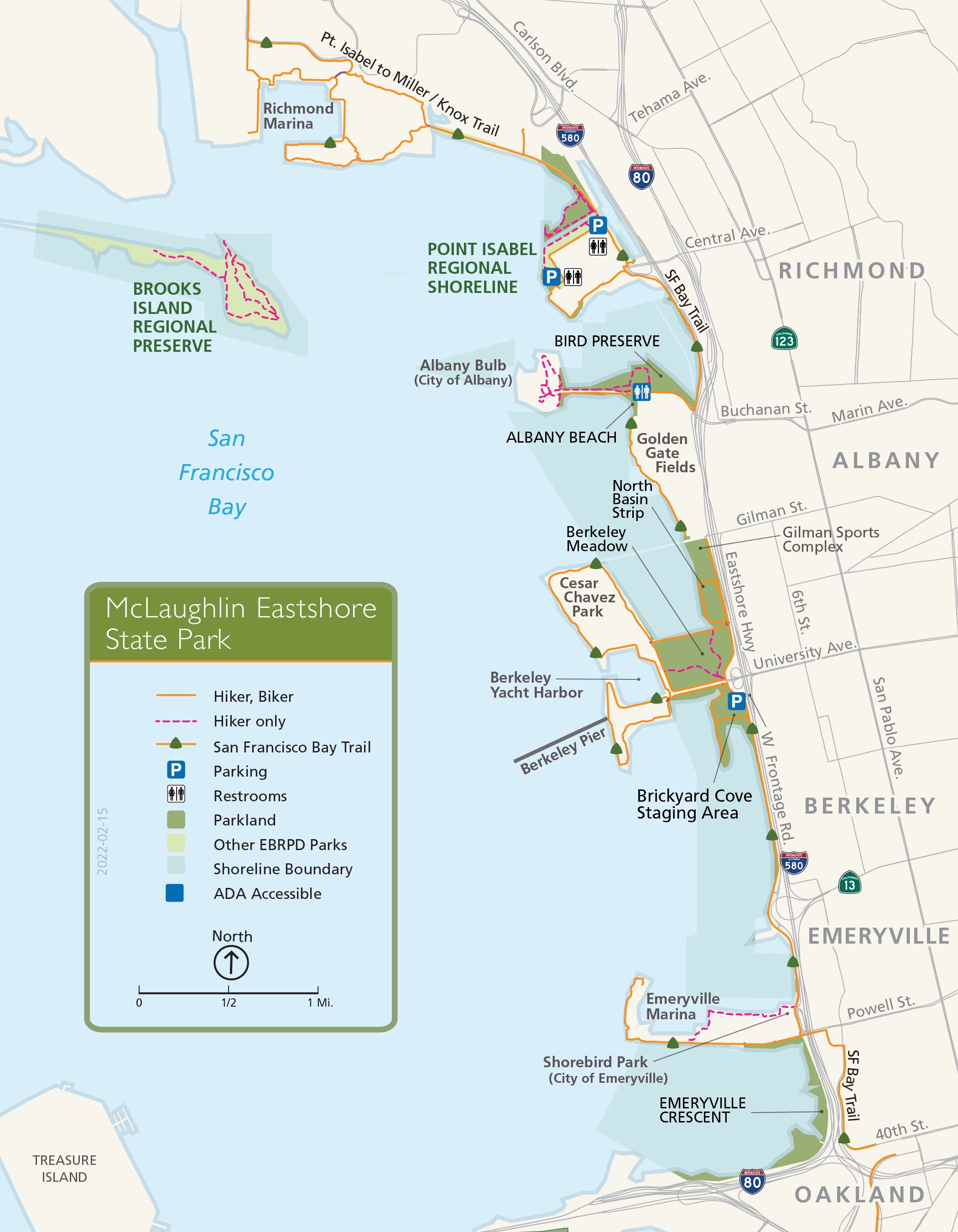 The shoreline reflects the influences of both natural systems and human intervention, with natural features such as tidal marshes and beaches intermingled with man-made elements such as former municipal landfills.

Pedestrian and bicycle trails run almost the entire length of the park and provide a panoramic view of the Bay.

The Tom Bates Regional Sports Complex (also known as the Gilman Fields) is managed and operated by the City of Berkeley’s Recreation Department. For field reservations/permits, please contact DRobles@CityofBerkeley.info.