VERY HIGH Fire Danger in Effect for Parks in NE REGION on SATURDAY, July 2. Follow All Restrictions Below.

Bring drinking water when you visit the 1,979-acre Preserve; no drinking water is available. Please note that dogs must be on-leash at all times while visiting or hiking in Brushy Peak Regional Preserve to protect the area's fragile natural resources.

Visitors desiring to access the top of Brushy Peak and the northern part of the preserve should contact LARPD directly at (925) 373-5700 for information on guided tours.

From I-580 in Livermore, exit north at Vasco Road and immediately turn right onto Northfront Road. After about .8 miles turn left onto Laughlin Road and proceed approximately two miles to the staging area at the end of Laughlin Road. 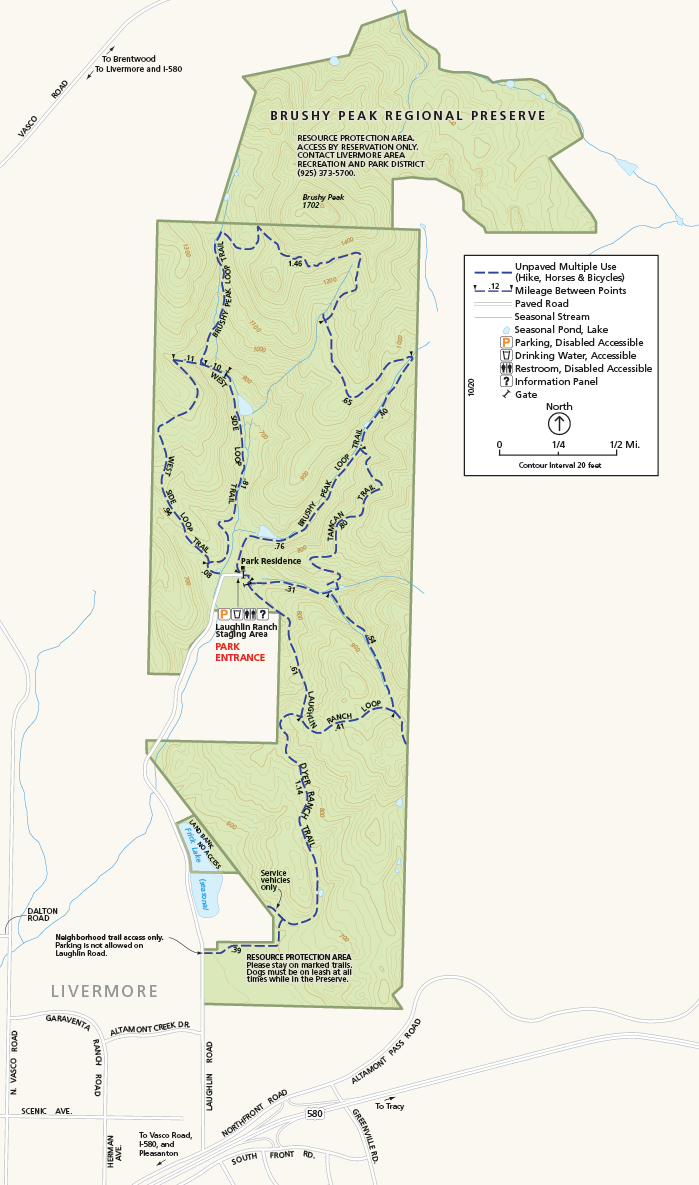 The parking and restroom are wheelchair accessible at the Laughlin Ranch Staging Area.

Brushy Peak Regional Preserve's wide variety of wildlife species is supported by a similarly broad range of plant communities, among which California annual grassland is dominant. Non-native herbaceous plants and annual grasses (ryegrass, wild oats, soft chess, etc) predominate a consequence of the land's continued cultivation in the past. Native perennial grasses (purple needlegrass, creeping wildrye, etc.) are sporadic and widely scattered; saltgrass is found in the alkali seasonal wetlands, such as in the main valley drainage within which the staging area lies. Common native wildflowers include the California buttercup, Johnny jump-up, lupine, blue-eyed grass, fiddlegrass, and many others. These and non-native wildflowers provide forage for numerous insects an important link in the food chain. The most obvious grassland wildlife species is the ground squirrel, whose burrows are inhabited by amphibians, reptiles, badgers, burrowing owls, and the San Joaquin kit fox.

Squirrels and cottontails are prey to red-tailed hawks, ferruginous hawks, and golden eagles. Western meadowlarks nest and feed in the grasslands, and fill the air with beautiful song. Sandstone rock outcrops provide nest sites for a variety of raptors and rock wrens. Woodland habitats range from pure stands of coast live oak and California buckeye to intermixed habitats of valley oak, bay laurel, and sagebrush. Shrubs include poison oak, monkeyflower, gooseberry, and elderberry. The oak woodlands support deer, bobcats, rodents, and many bird species such as hummingbirds, cedar waxwings, orioles, robins, woodpeckers, and various raptors. Several spring-fed ponds, constructed by ranchers in the past, lie along the seasonally wet drainages and provide habitat for federally protected California red-legged frogs and the California tiger salamanders.

Other native amphibian species that breed in the ponds include the Western toad and Pacific tree frog. The Preserve's shrublands are dominated by the California sagebrush, with some bush monkeyflower. The south-facing slopes of Brushy Peak support this coastal sage plant community, which represents a habitat that typically supports the state and federally threatened Alameda whipsnake.

Brushy Peak is a 1,702-foot landmark at the juncture of the San Francisco Bay Area, the California Delta, and the Central Valley. The peak and its environs have been recognized as sacred by generations of native Californians. Due to its geographical position, the area lies at the center of a network of ancient trade routes that linked Bay Area Ohlones, Bay Miwoks, and Northern Valley Yokuts, who were drawn to the area for economic, social, and ceremonial events. The Ssaoam triblet of the Ohlone peoples was probably the most closely linked to the Brushy Peak area, living in the surrounding dry hills and tiny valleys around the peak and nearby Altamont Pass. Ssaoam populations in the dry summer months may have dispersed and reconverged at various camps throughout the year.

The triblet hosted trade feasts near Brushy Peak, acting as brokers in a regional trade network with the Volvons, a tribelet of the Bay Miwok, and the Tamcans of the Northern Valley Yokuts. The Ssaoam's ability to prosper may have had as much to do with their occupying this strategic trading location as with their ability to use the area's food and limited water resources. By the early nineteenth century, life had changed for these tribes.

In 1772, Pedro Fages made the first European expedition into west-central California, passing through the Livermore Valley on his return to Monterey. From 1806 to 1836 the Ssaoam lived at Mission San Jose, founded in today's Fremont in 1797. By the mid-1800s, as mission lands were divided into Mexican ranchos, some of the former Mission San Jose Indian people became laborers on the new ranchos. By 1848, at the conclusion of the Mexican-American War, the rancho lands of central California had become part of the United States. During California's Gold Rush period, the rocky outcrops of Brushy Peak became retreats for bandits, and a favorite retreat of the legendary Mexican bandit Joaquin Murietta. During the 1870s homesteads were settled on and around Brushy Peak, and the land itself was probably grazed as part of the Rancho de los Vaqueros.

Between the 1890s and World War I, local ranch families held picnics and dances around the rock outcrops, and in 1900 and 1901 San Francisco's Bohemian Club held outings on the peak for prominent local citizens. During the 1920s and 1930s Joseph Laughlin built farm buildings on the property, which are probably the remains of the buildings seen in the parkland today. Brushy Peak was first identified as a potential park by the Livermore Area Recreation and Park District (LARPD) in the 1970s, and that agency acquired 507 acres as parkland in 1994. In 1997 an agreement between LARPD and the East Bay Regional Park District pledged cooperation in the further acquisition, planning, and protection of Brushy Peak Regional Preserve. 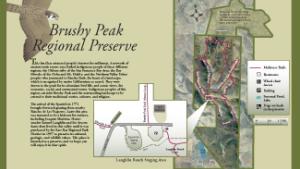 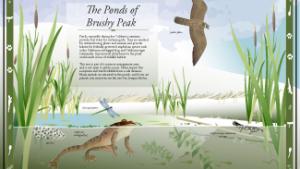 The Ponds of Brushy Peak