Whether you call it a Ladybug Love-In, a Ladybug Pajama Party, or a convergence of hibernating ladybird beetles (Hippodamia convergens), witnessing thousands of ladybugs clumping together mid-October through early February is a fascinating and possibly surprising experience! There are many places in the East Bay hills where ladybugs hibernate, and each year is different, but one constant location has been along the Stream Trail just downstream from the Prince Trail Junction, in Reinhardt Redwood Regional Park.

Why do ladybugs hibernate, and why together in this and other locations? Nobody knows for sure, but some ideas include:

• There is generally not enough food in winter since the populations of aphids and other soft-bodied insects that ladybugs eat go way down. Before it gets too cold ladybugs fly into areas to hibernate where it’s cool and damp, and where their body temperatures will stay lower so that they will not burn as much fat.
• Ladybugs from previous generations, it is thought, leave behind pheromones (scent) that attract the next year’s ladybugs.
• Together they have more protection compared to hibernating alone. They taste horrible, so if a bird eats one of thousands, everyone else will survive, and the bird probably won’t eat any more.
• Together they can mate during periods of warmth, something not easy to do when alone.

If you want to visit the hibernating beetles, it is a fairly easy 1.5-mile walk one way up the Stream Trail when starting at the Canyon Meadow Staging Area in Redwood Reinhardt Regional Park. It's best not to touch or disturb the ladybugs except to gently move them off the trail. Walk carefully through the area where they are congregating to avoid accidentally stepping on any. Remember that collecting any wildlife is prohibited in Regional Parks.

Learn more about ladybugs in the East Bay 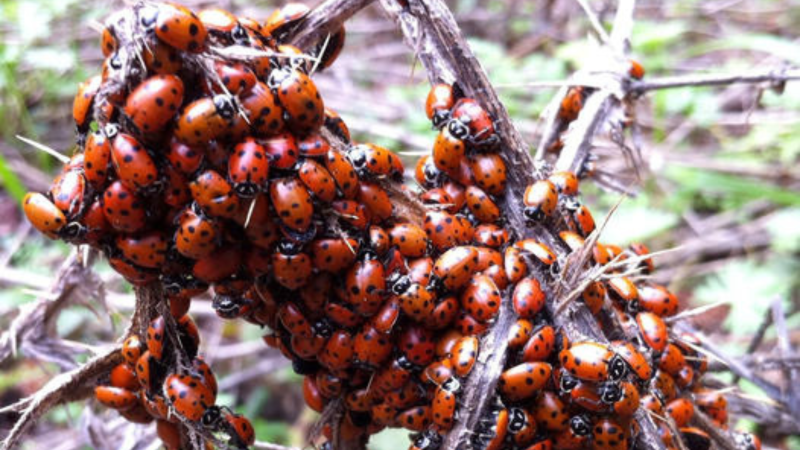