The many parklands of the East Bay Regional Park District are more than just a pretty place. There are creeks that provide drinking water, trails to walk and ride that help us live healthy lives, and grasslands that are grazed which support the local food economy. And now we have an independent, scientific report by economists to prove that East Bay Parks are more than just a pretty place. 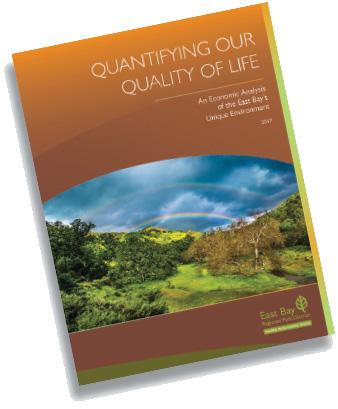 Based on this 2017 report, we now know that the Park District:

What does that translate into? This scientific report conclusively says that the District is interconnected with many aspects of life in the East Bay including infrastructure, jobs, transportation, public health, and housing.

In addition to these benefits, the District is a good investment. Based on our annual budget of $127 million, every $1 yields a return of $4. This means that Alameda and Contra Costa County taxpayers are getting good value for themselves and all residents regardless of background.

This report is the second installment in a longitudinal study by Economic & Planning Systems, Inc, a land use and economics firm based in Oakland. The first report was produced in the year 2000 and was groundbreaking at the time. A lot has changed over the past 17 years. The 2017 report builds on the 2000 methodology and will add to the national body of research about the economic impact of parks and open spaces.

What does this all mean for you as a resident of Alameda and Contra Costa Counties and as a park user? It means that you can go out and enjoy East Bay Parks knowing that they are more than just pretty places. They are an integral part of life in the East Bay.