This 277-acre oak/bay parkland preserves the habitat of the extremely rare Alameda manzanita as well as other indigenous plant and animal species. A staging area at the end of Coach Drive serves as the trailhead for a two-and-one-half mile trail system that leads to ridgetop vistas of San Pablo and Richmond Bays, Mt. Diablo, and Mt. Tamalpais. For park information, telephone toll free: 888-EBPARKS (888-327-2757), option 3, ext. 4534. 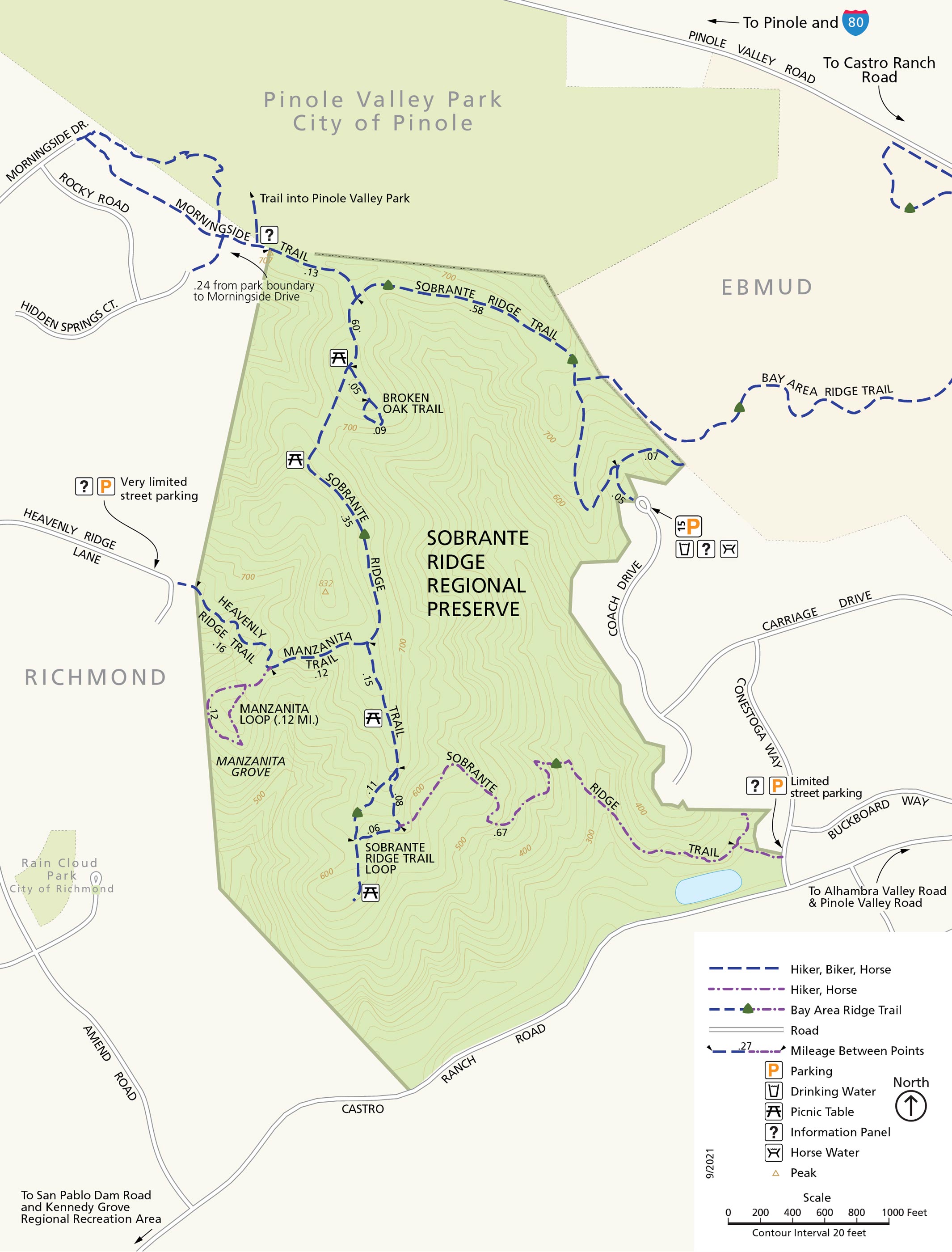 Sobrante Ridge Regional Preserve has three entrances; Conestoga Way, Heavenly Ridge Lane, and Coach Drive. The trails in this park consist of dirt fire roads and multi-use single-track trails, all of which have elevation gain and loss. Wheelchair accessibility is currently unavailable in this park although there are plans in the near future to install a wheelchair accessible gate at the top of Heavenly Ridge Lane.

Wildlife abounds in the Preserve's varied habitats of oak/bay woodland, coyote brush scrub, miniature "forest" of Alameda Manzanita, and open grassland. Coyotes stalk gophers in the tall grass; deer bed down by day in the tall thickets; salamanders sleep all summer buried in the woods; and golden eagles soar high above the ridge, scanning the ground for prey. The wildlife refuge pond at the southeastern end of the Sobrante Ridge Trail, near the intersection of Conestoga Way and Castro Ranch Road, is home to a variety of birdlife, including many red-winged blackbirds. There are also benches and picnic tables overlooking the hillsides.

The lands of Sobrante Ridge Regional Preserve were dedicated to the East Bay Regional Park District by a local construction company in 1985. The scenic ridgelands were preserved after developers agreed to limit an adjacent subdivision to the low-lying areas.

The area was formerly known as the Cutter Ranch, and belonged to Cutter Laboratories in Berkeley through the 1970s. The lab raised horses and cattle there, using blood from the animals to produce tetanus and diphtheria vaccines.

Today's Preserve was once part of the vast Rancho Sobrante land grant, given by the Mexican government to Juan Jose Castro in 1840. Great herds of Spanish longhorn cattle freely roamed the hills at that time, and were valued by the rancheros for their hides and tallow. The name Sobrante in Spanish means "excess" or "leftover," and reflects the late date of the land grant: the lands were leftover lands, not included in previous grants.