The area that is now Round Valley Regional Preserve was once home to California Indians. It was probably a boundary between several different tribal groups, an area where members of East Bay and San Joaquin Valley groups met periodically to trade and socialize. Evidence of Native American use has been uncovered at several archaeological sites within the valley. 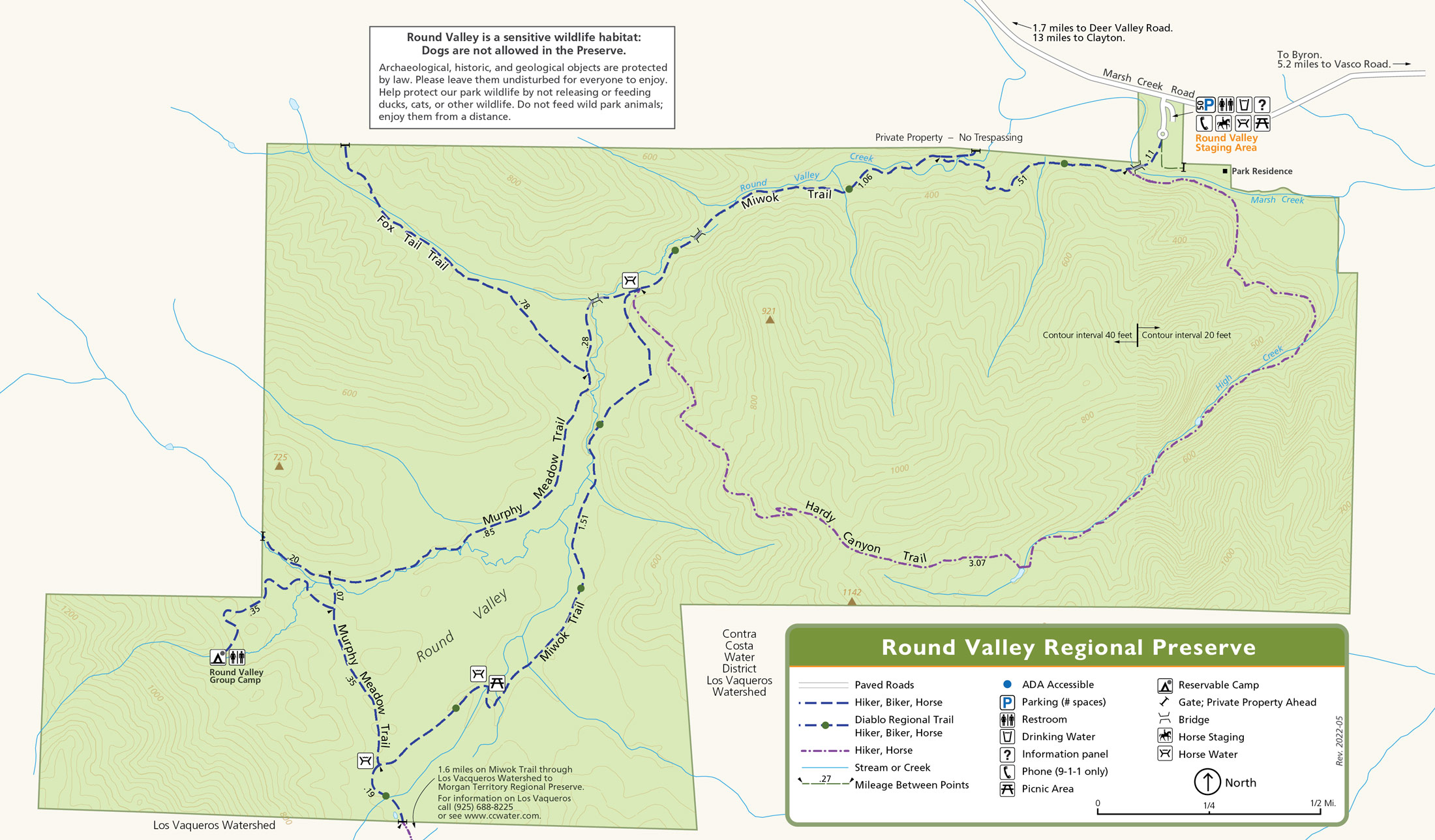 The restrooms and drinking fountain in the parking lot are wheelchair accessible.

The steep, northeastern-facing slopes in the southwestern portion of the preserve support mixed oak woodland and chamise/black sage/manzanita chaparral. Riparian and wetland vegetation consisting of moisture-dependent grasses, rushes, herbs, shrubs, and/or trees occur along Round Valley Creek, which is a tributary of Marsh Creek originating in the uplands surrounding Round Valley.

Riparian vegetation occurs primarily along Round Valley Creek, which the Miwok Trail parallels beginning about one-half mile from the staging area. The creek flows until late spring or early summer, after which the water pools at intervals along the streamcourse. Tree cover along the banks is sparse; vegetation includes spikerush, sedge, rabbitsfoot grass, watercress, curly dock, monkey flower, and willow.

Round Valley Regional Preserve is habitat for a wide variety of wildlife typical of that found in the East Bay Area and also some species more common to the Central Valley. As with all California valley and foothill environments, several species in this area have evolved to survive with only seasonal supplies of water and green vegetation.

Mammals in Round Valley include the California ground squirrel, San Joaquin pocket mouse, Audubon's or desert cottontails, and the endangered San Joaquin kit fox. Round Valley is one of the northern extremes of the kit fox range in California. This shy fox, which is on the Federal and State endangered species lists, lives in the sheltered valley but is subject to isolation and resulting local extinction due to elimination of viable corridors and lack of genetic diversity among the small local population. The kit fox is prey to coyotes and red foxes, and dogs can be a disease vector to the kit fox. Like other scavengers, it is susceptible to secondary poisoning. The challenges faced by the kit fox and its future in the East Bay is one of the primary subjects of the ongoing Alameda-Contra Costa Biodiversity Study, and the Park District is playing a major role in protecting the fox by protecting its habitat in Round Valley.

Ponds and streams in Round Valley support the federally threatened California red-legged frog, western toads, western pond turtles and Pacific tree frogs. These species breed with the onset of winter rains, and burrow into the mud or use rodent holes for hibernation during the dry summer months.

The bedrock geology of the preserve is Cretaceous Panoche shale and sandstone with deposits of recent alluvium on the surface in valleys and creek drainages. The preserve has small amounts of high-quality soils, located mainly in the level areas along Marsh Creek and in the valley proper. Most of the soil, however, is of a lower quality suitable only for range, wildlife and watershed uses. The Marsh Creek (Mount Diablo) Fault is located about two miles southwest of the preserve. This fault has produced small earthquakes; two recent significant earthquakes (magnitude 5.5 and 5.6) occurred in 1980.

The preserve is open for hiking, horseback riding and bicycling (with some restrictions). The climate at the preserve is arid and temperatures commonly exceed 100 degrees Fahrenheit in the summer months. Be prepared for the summer heat: use sunscreen, wear a hat and loose-fitting clothing, wear good hiking shoes. Drinking water is available at the staging area. Be sure to carry plenty of water with you during your hike.

One group camping site; 25-person maximum. Camping reservations must be made at least five (5) days in advance. Non-potable water available at the site. There are leveled tent spaces, picnic tables, and a disabled accessible restroom. It's a 3.6-mile walk from the Marsh Creek staging area. Dependent upon weather and trail conditions, two cars can go to the site to carry materials; no shuttling, campers must walk from the staging area. When not in use as a Group Camp, the site is available to the general public for backpacking. Make reservations for Group Camping.

Due to the sensitive nature of the wildlife habitat at Round Valley, dogs are not allowed in the park.

Round Valley, Brentwood
View All Events

The land was purchased in 1873 by Thomas Murphy, an Irish immigrant who established a ranching and farming operation. Murphy's grandson, Jim Murphy, sold the core 700 acres of Round Valley to the East Bay Regional Park District in 1988. It was his wish that the land be preserved in open space for public enjoyment, rather than used for residential development, or, as was once proposed, a refuse disposal site. A few old pieces of farm equipment in the preserve date to the late nineteenth century or early twentieth. Remember that all archaeologic and historic objects in the preserve are protected by law; please leave them undisturbed for others to see.