On December 6, 2016, The Park District Board of Directors renamed Martinez Regional Shoreline to Ted and Kathy Radke Martinez Regional Shoreline in honor of Ted Radke and his wife, Kathy. Ted Radke served on the Park District Board from 1978 to 2014 and was instrumental in preserving the Martinez waterfront, increasing funding for land acquisition and working with legislators to protect the environment. Kathy Radke worked to save Mt. Wanda from development, preserve Franklin Hills as open space and, with her husband, was a co-founder of the Contra Costa Ecology Action Education Institute. See press release.

The shoreline park offers visitors a variety of experiences. There are group picnic areas, Baseball fields, bocce ball courts and soccer fields in the eastern section of the park, operated by the City of Martinez. The District operates the western section with its quiet open lawns, small family picnic areas, and ponds and creeks. Nearly three miles of trails offer peaceful walks through the marsh and along the shoreline.

From Highway 4 in Martinez, exit at Alhambra Avenue and go north. Turn right onto Escobar and Left onto Ferry St. Once across the railroad tracks, turn right onto Joe DiMaggio Way and then follow the road to the left as it turns into N. Court St. The main parking lot will be immediately on the left.

From I-680 in Martinez, exit at Marina Vista and go west. Turn right onto Ferry St. Once across the railroad tracks, turn right onto Joe DiMaggio Way and then follow the road to the left as it turns into N. Court St. The main parking lot will be immediately on the left. 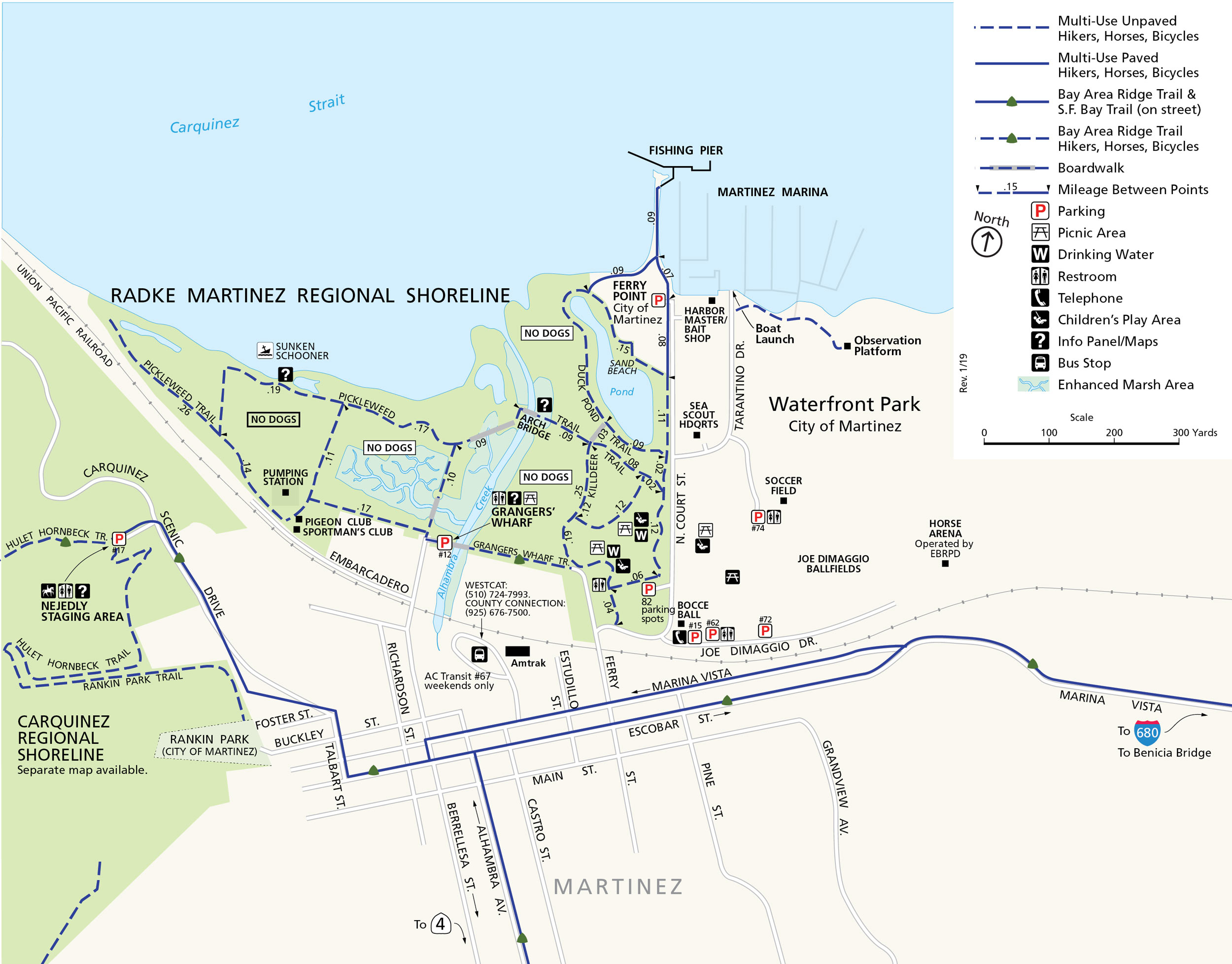 This quiet area of the park changes with the seasons. Its residents come and go, and there are subtle changes in color and mood. Enjoy this experience independently along the Pickleweed Trail, or walk with others on a naturalist-led excursion, when available. Dogs are not allowed in the marsh.

During the riding season (May-September) the horse arena offers competition for youthful riders. Membership in the Tri-Cities Horsemen’s Association is available in Family, Single, and Junior categories. Membership is open to all, and horse ownership is not required. There is a fee. See Calendar of Events.

Bicycles are allowed on park trails.

If you are age 16 or older, a California state fishing license and stamps are required to fish from shore. The fishery in Carquinez Strait offers striped bass, sturgeon, shark, some flounder, and catfish. Licenses are available at the marina bait shop. No Park District fishing permit is required.

The Martinez Marina has a boat repair yard and fuel dock, a bait shop, restaurant and bar, managed by the City of Martinez. There is a launching fee. For more information phone the marina at (925) 313-0942.

The soccer field is maintained by the city of Martinez and is available on a first-come, first-served basis during the week. It is reservable on weekends by phoning (925) 372-3510. Hours are 8 a.m. to 5 p.m.

A heritage of the predominantly Sicilian population in the shoreline's early days, the playing of bocce ball is a traditional Martinez activity. The sport is played outdoors on wooden-sided courts lined with finely crushed oyster shells. First Northern California Open Bocce Ball Championships were hosted at the shoreline park in 1979. For team information phone (925) 372-3510.

The Baseball complex is named for Martinez native Joe Dimaggio, who played for the New York Yankees during his baseball career. The complex has four Baseball diamonds available on a first-come, first-served basis. For league play, these areas may be reserved by phoning (925) 372-3510. There is a fee for league play.

A magnificent trail leading the way to deep history, Hulet Hornbeck Trail connects Radke Martinez Regional Shoreline and the home of the John Muir National Historic Site which features his home from 1890 until his death in 1914. John Muir plays a great roll in influencing East Bay Regional Park District by his love for nature and preserving rich parkland.

Spiritually integrated with nature, the Father of our National Parks, John Muir was born in Scotland on April 21, 1838. His love for nature rejected the whole theory of civilization and valued liberation. Muir believed in environmentalism. His constant contact with nature, wild landscapes and creatures bonded spiritually with the wilderness. Thrilling mountains in California soon became his home, an area that previously was cherished by Indians, Spanish and the Anglo-Americans for centuries.

Muir married Louie Strentzel in 1880 at the age of forty-two and they lived on a fruit ranch in Martinez. Enriched with joyful history, Alhambra Valley in Martinez was the best place for Muir to start his family. He worked in the vineyards that his father-in-law, Dr. John Strentzel started in 1853. There were over a 1,000 varieties of fruits, nuts and grapes that Dr. Strentzel had experimented with in the Alhambra Valley and had won a state award for the ravishing white still wine that was produced from his vineyard. Muir was his proud son-in-law who shared the same love for nature. Muir played a major role in preserving our lands and heritage that now has become the vast national park system. Not just that, he influenced many of EBRPD’s founders.

John Muir’s home still stands today and is a National Park Service Historic Site, located on Alhambra Avenue in Martinez. EBRPD’s Hulet Hornbeck Trail, part of the California Hiking and Riding Trail, can be accessed at this historic site, and it meanders just south and west of his home on to Carquinez Strait Regional Shoreline.

Martinez was once a gold rush and shipping boomtown in 1849. The gold rush played an integral role in the economy in Martinez. Early settlers would buy, sell and ship their goods here. One day, a gold miner wanted to celebrate striking gold and decided to have a glass of Champagne at the local bar. Upon arrival, the man asked for Champagne with glory. Julio Richilieu, the bartender replied that he didn’t have Champagne but can make him a cocktail drink called “Martinez Special”. The miner agreed with delight and drank a couple of the special Martinez Cocktails. After finishing his last drink for the night, he couldn’t say the “z” in Martinez and simply said “Martini”. From this story, Martinez was known as the birth place of the drink named Martini.

Off to the west of Martinez Shoreline, lays the remains of the schooner Forester in the mud flats since 1935. The schooner was launched on November 10, 1900 in Alameda. Otto Daeweritz, who was the first and only captain of the Forester, would haul a cargo of lumber from northern Oregon or Washington to China, India, and Australia. Before the last voyage in 1932, she had taken lumber to the other side of the pacific and returned with coconut meat (copra).

At 205 feet from stern to stern, 32 feet wide in the middle, and weighing 680 tons; the Forester was once Americas’ fastest ship. She was burned to the waterline in 1975. The seventy five year old schooner Forester was caught flames after an electrical fire swept through the interior. Charles Fitzgerald, who bought out the schooner for $8,000 in 1932, stood calmly watching the Forester burn to the waterline. The skeletal remains of the ship still exist today along Martinez Shoreline. 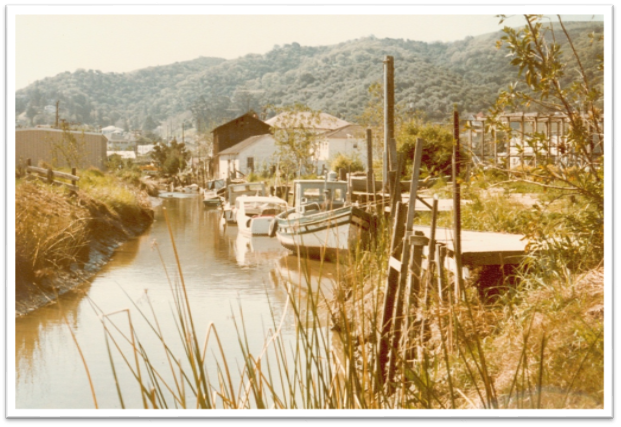 During the 1970s and 1980s, people who lived in the Bay Area remember the commercial featuring an Alhambra water deliveryman who carried a 5 gallon jug over his shoulder singing up a walkway, “Me and Alhambra water makin’ friends”. Alhambra bottled water was established in Martinez near Alhambra Creek and was known throughout the west coast. Loren Lasell started the Alhambra Water company in 1902. He had settled in Martinez in 1884 and opened a general store where he sold groceries, coal, hardware and dry goods. The general store was successful and later he eventually acquired a ranch in the Alhambra Valley. The ranch included pure and natural spring water from Alhambra Creek, located in Radke Martinez Regional Shoreline. Lasell laid pipes (eight mile long) to carry water from the ranch to the bottling plant that was located near the railroad station in Martinez. The workers loaded glass jugs of water on to delivery trucks and in trains which distribute pure spring water to Oakland and San Francisco. The water was so popular for its taste that they had to grow in size. 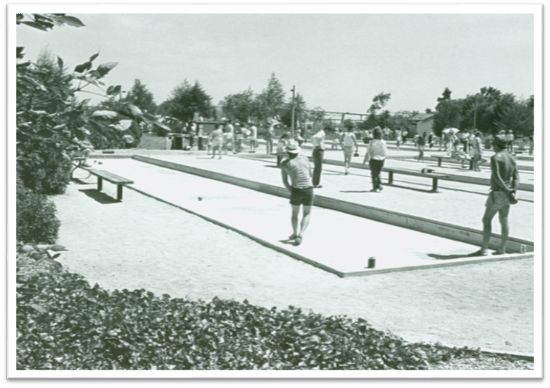 Martinez Shoreline was once an old fishing village in 1876. The Italian population who migrated had a big impact in the fishing industry and contributed significantly to the economy. Many Italians were fishermen who caught salmon from Martinez Shoreline into the Carquinez Strait. During 1882, Martinez owned two of the twelve fishing canneries in the bay area and about 2,500 fishermen were working the Straits.

The Italians brought back a unique game called Bocce. Working long hours fishing, on sunny days they would play Bocce, and there are still courts located in Radke Martinez Regional Shoreline today. Bocce is one of the oldest games played by the Egyptians as early as 5000 B.C. and by the early Romans. They would throw a ball toward a target with a polished stone. However, the earliest modern Bocce was played by the Italians about two millennia ago. The Italian game, Bocce flourished in the United States at the turn of the century. The first championship was hosted in Radke Martinez Regional Shoreline in 1979. A heritage of the predominant population in Martinez Shoreline, Bocce is a traditional sport that is still played today. 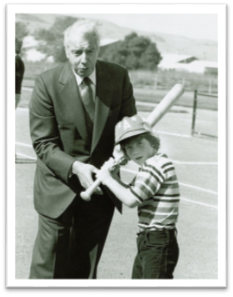 Radke Martinez Regional Shoreline has a magnificent waterfront and many recreation areas and activities, such as boating, hiking, fishing, a horse arena, soccer field, bocce ball court, and softball field. The softball complex was named after a famous New York Yankee baseball player, “Joltin’ Joe DiMaggio”. DiMaggio is an Italian American who was born in Martinez and his father, Giuseppe Paolo Di Maggio had been a fisherman for years. Their home growing up was located nearby Fisherman’s Wharf in Martinez. During those years, fishing was a competition. About 20 to 30 boats would sail out to the shore and try to gain better access to fetch fishes and crabs. The fishermen would have to know every rock in the water and tricks along the shore to sell to their dealers. The DiMaggio’s had been fishermen for generations until three of the sons went from fishermen’s Wharf to becoming the greatest baseball players. 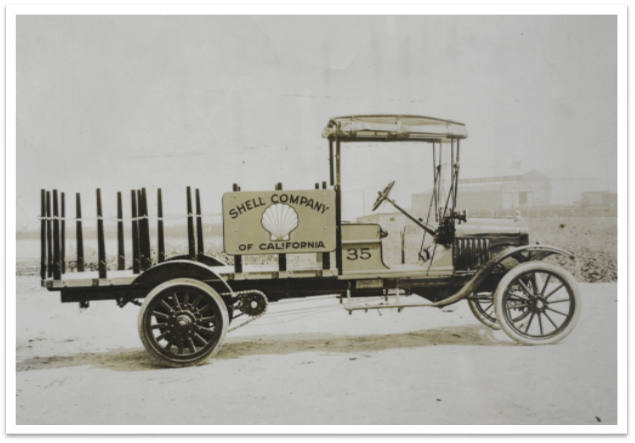 In 1915 the population in Martinez was rapidly growing. That was when the Shell Oil Company arrived. Shell Oil chose Martinez because the shoreline was an ideal spot and it had what a refinery needed. Deep water near the shoreline was an important shipping point for the oil company at that time and not just that, railroad was another way to transport oil. The wharf in Radke Martinez Regional Shoreline was a great asset to the Shell Oil Company. Many big companies have passed through Radke Martinez Regional Shoreline and now the park is filled with rich history. 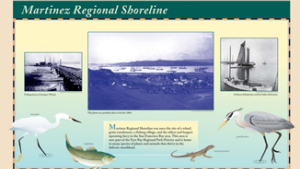 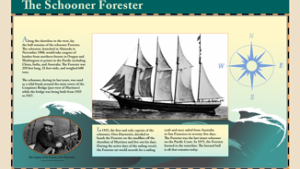 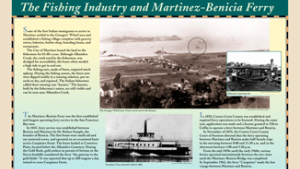 The Fishing Industry and Martinez-Benicia Ferry 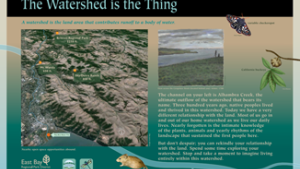 The Watershed is the Thing 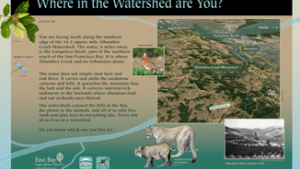 Where in the Watershed are You 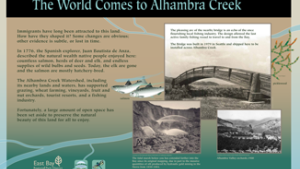 The World Comes to Alhambra 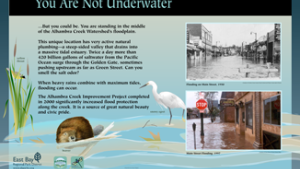 You Are Not Underwater