Dublin Hills Regional Park spans approximately 654 acres within an undeveloped open space corridor consisting of the main ridge that connects Donlon Point on the Park's southern boundary to Wiedemann Hill located on the adjacent private property to the north, interspersed with steep-sloped canyons. The parkland is bounded by Interstate 580 to the south, Schaefer Ranch to the southwest, private grazing land to the north, northeast, and northwest, and California Highlands on the southeast. 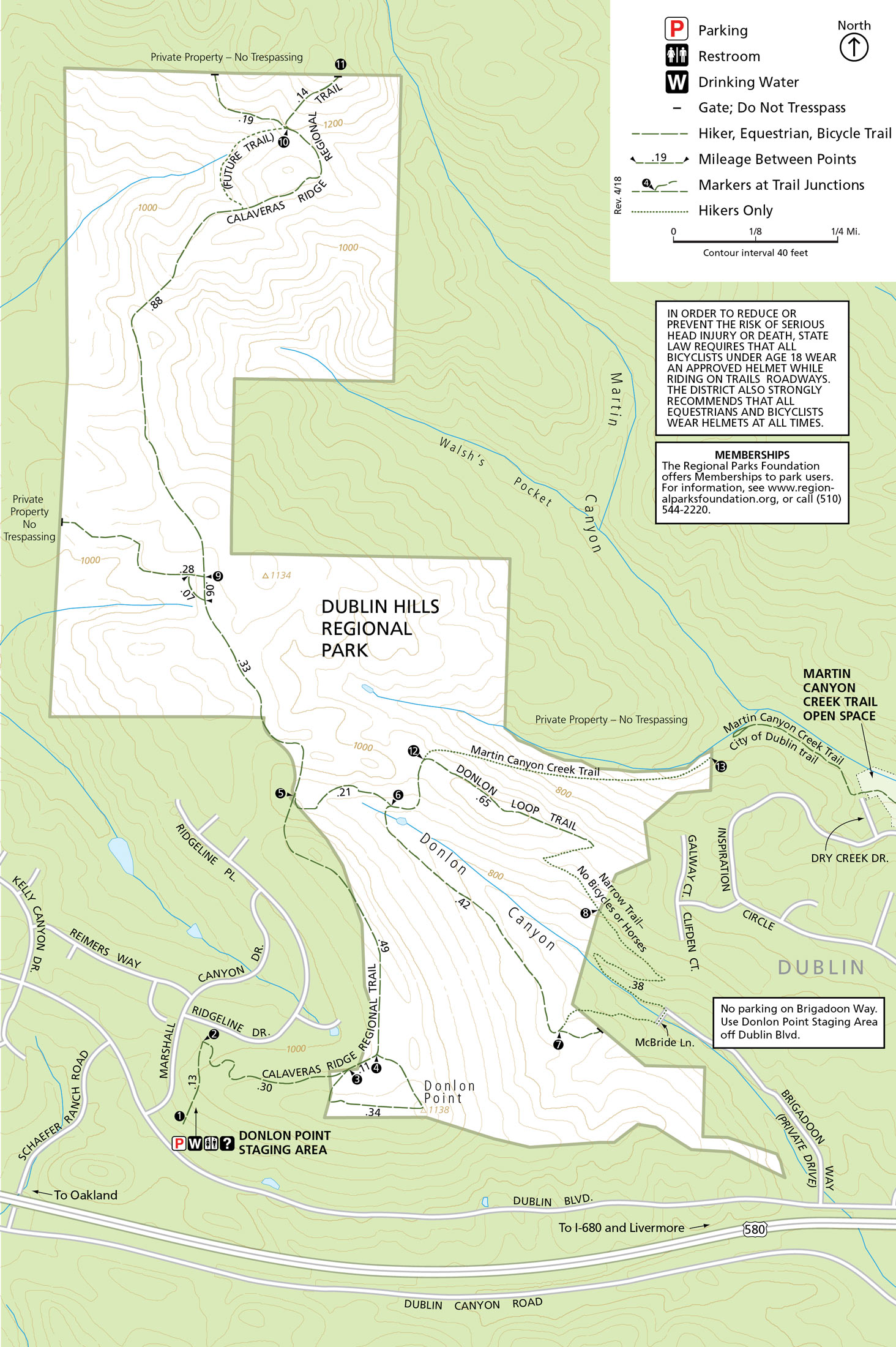 The Park's trails, including a segment of the Calaveras Ridge Regional Trail, provide local access and offer excellent views for hikers, bicyclists, and equestrians. The Calaveras Ridge Trail begins near the Schaefer Ranch development and soon delivers you to grassland areas largely untouched since the 1800s.

Dublin Hills has several minor valleys and swales that collect and drain water seasonally into Palomares Creek and Dublin Creek, located south of I-580. Several streams and springs maintain seasonal flow through the park's steep drainages. Most headwaters of these streams begin in open grassland and drain into dense coastal live oak and California bay woodland.

Most of the bedrock geology of Dublin Hills consists of shale, sandstone, and conglomerate. The sandstone and conglomerate units form the ridges and knolls, while the slopes and valleys are underlain with softer shale.

California annual grassland is the dominant plant community in Dublin Hills and covers approximately 300 acres of the ridgelands. The grassland is composed of native and non-native annual and perennial grasses interspersed with many species of native and non-native forbs. Grasslands also extend under the woodland canopy along the edges of the oak-bay woodlands. The primary watersheds are dominated by coast live oak along the outer edges with California bay laurel concentrated in the drainage bottoms. The understory at the bottom of the drainages is nearly barren due to the blanket coverage of fallen bay leaves. Shrublands represent a relatively small plant community within Dublin Hills and are characterized by coyote brush and poison oak scattered along the southern edge of oak-bay woodlands.

Cooper's hawks, a state species of special concern, reside in the area, as do the redtailed hawk, norther harrier, white-tailed kite, California horned lark, loggerhead shrike, and great-horned owl. The golden eagle, a state species of special concern as well as a fully protected species, uses the grasslands of Dublin Hills for hunting.
Dublin Hills' wetland habitats include ponds, seasonal drainages, and perennial seeps that can be used as a source of food or water by a variety of wildlife such as coyotes, eagles, deer, and occasional migratory shorebirds. The ponds likely support amphibians commonly found in the area such as the California newt, tiger salamander, Pacific tree frog, and potentially the California red-legged frog, a federally threatened species and state species of concern. A few species of ducks are known to use the park's ponds during the winter season. Dublin Hills' several seasonal streams and springs provide an important source of water for wildlife and provide additional habitat for amphibians.