Carquinez Strait Regional Shoreline comprises 1,568 acres of bluffs and shoreline along Carquinez Scenic Drive between the town of Crockett and the hillsides overlooking Martinez. This parkland provides a gateway to the river delta region along the northern edge of Contra Costa County. The coastal hills rise steeply up to 750 feet above Carquinez Strait. From the highest elevations, the view includes the marshland of Benicia State Recreation Area to the north across Carquinez Strait. From atop Franklin Ridge along the Franklin Ridge Loop Trail and the California Riding and Hiking Trail, the horizon is pierced by the peaks of Mt. Tamalpais to the west and Mt. Diablo to the east. Looking south from this high point are the ridges of Briones and Las Trampas regional parks.

The topography of this park consists of open, rolling grasslands, wooded ravines, eucalyptus-shaded meadows, and river shoreline. Multi-purpose trails provide access to canyon views and ridgetop vistas. At the northwestern edge of the shoreline park, the remnants of a former brickworks, grain wharf, and resort, dating back to the turn of the century, recall the historic character of the site. The sights and sounds of tugboats along this broad waterway are also part of the charm and excitement of Carquinez Strait Regional Shoreline.

The park exists in two sections that are not contiguous and are separated by private property. Parking is available at two locations. The Bull Valley Staging Area offers access to Eckley Pier and the western portion of the park, accessible from Carquinez Scenic Drive. From Highway 4 west of Martinez, exit at Cummings Skyway. Turn right on Crockett Boulevard, right again on Pomona Street in Crockett. Pomona Street becomes Carquinez Scenic Drive. Proceed to the staging area, on the left. Driving another 1.5 miles will bring you to another small staging area, also on the left, and another .65 miles will bring you to the Port Costa Staging Area (this is the western trail head of the George Miller Trail). From I-80 in Crockett, exit onto San Pablo Avenue or Pomona Street, depending on your direction of travel (San Pablo Avenue become Pomona Street east of I-80). Go east on Pomona into Crockett and follow directions above. 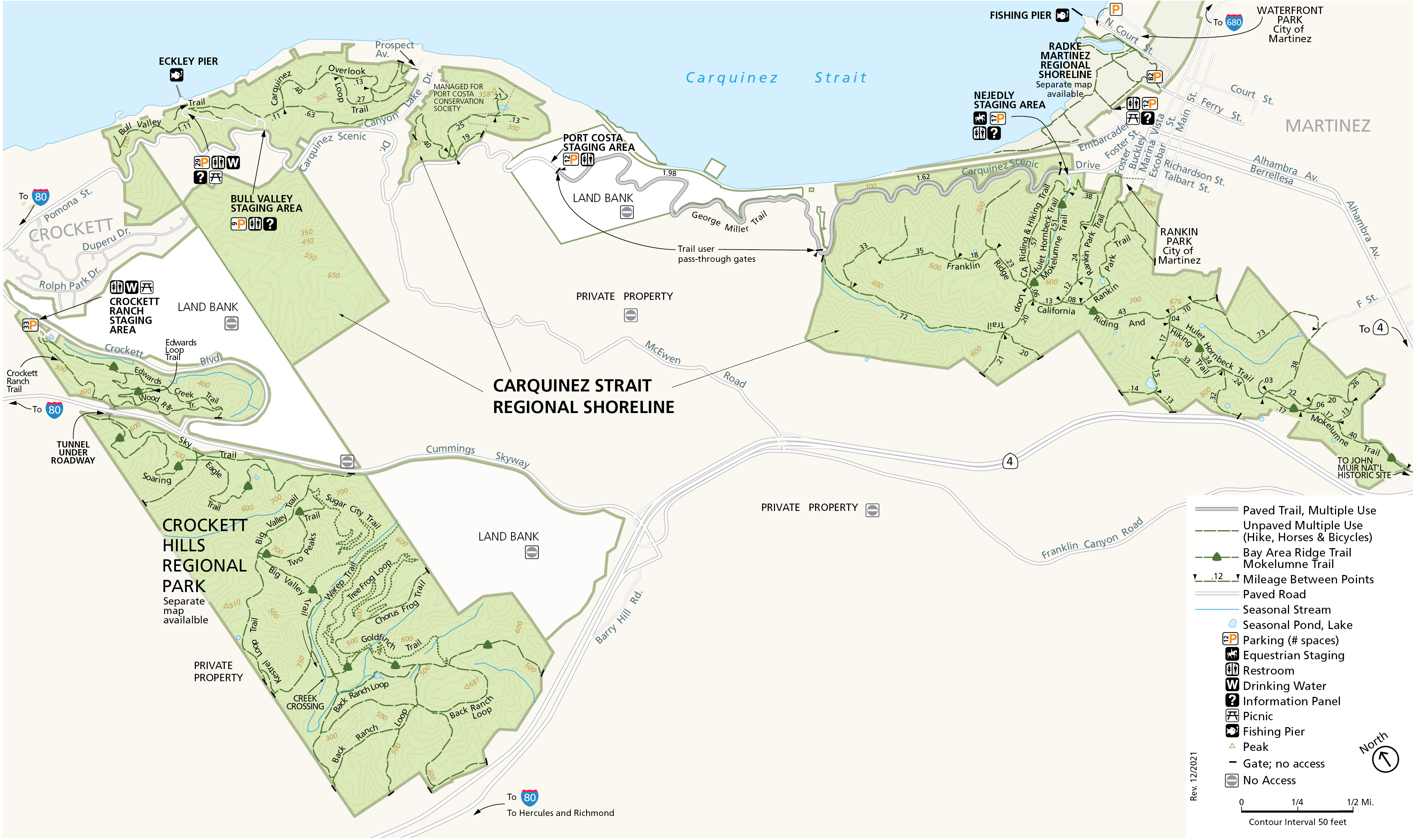 Cows and calves are currently in the hills above Martinez along the California Riding and Hiking Trail. They will be removed in early June. Cattle were recently introduced to Park District land on either side of Port Costa. They will graze until late June. 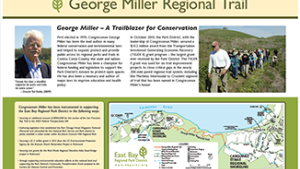 George Miller – A Trailblazer for Conservation