The District long-range goal is to preserve and enhance the Serpentine Prairie so that future generations of East Bay residents can enjoy this Northern California treasure as a place to volunteer, study native plants or just enjoy the visual artist palette from the spring wildflowers. Future management strategies will include targeted  grazing and  timed mowing to reduce specific species and continued monitoring to document the results of our management.

The Skyline Serpentine Prairie in Redwood Regional Park is home to one of Northern California's richest arrays of native plants as a result of naturally occurring serpentine rock found here. This small area is host to 17 species of California native grasses. Rare plants living in the prairie include the federal and state listed endangered species, Presidio clarkia, Clarkia franciscana and the CNPS 1B.2 rare plant Tiburon buckwheat, Eriogonum luteolum var.caninum. Extensive land use conversion and alteration has reduced the viable serpentine habitat in the East Bay hills. 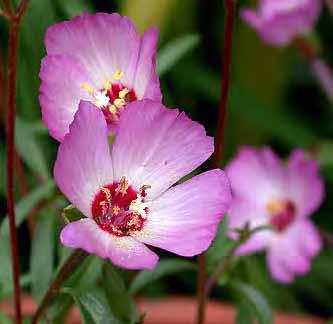 The Park District began the first phase of a major restoration project that included removing non-native trees, strategically mowing annual grasses and building a protective fence around the most impacted portion of the prairie in September of 2009. This restoration work and favorable climatic conditions have resulted in an increase in the Presidio clarkia population and impressive wildflower shows.

The timed mowing management strategy was expanded in 2011 to reduce the non-native annual grasses, particularly the annual barley, Hordeum murinum and ryegrass, Festuca perennis. This resulted in a dramatic reduction of exotic annual grasses and expansion of the native annual forbs and perennial grasses. The next phase of the restoration program removed the remaining exotic pines and hardwoods below the Dunn Trail. Further tree removals occurred in 2013. Current ongoing activities on the Prairie include specifically timed spring mowing, hand removal of non-native tree sprouts and other weeds by staff and volunteers, targeted controlled sheep/goat grazing and extensive vegetation monitoring under a contract conducted by Golden Hour Restoration Institute.

Why Preserve the Prairie?

Guide to Wildflowers of the Prairie